A "Distal Jet" is a fixed appliance that is used to move the upper molars back. If the patient is a candidate, it can be used instead of a headgear. It is effective approximately 85% of the time when the correction that is needed is 5mm or less and the twelve year molars have not erupted. Distal Jets can be used when adult and baby teeth are present (mixed dentition stage of development, age 8-11). The photos below show the typical amount of space that can be created.

A Forsus™ Appliance is a fixed inter-arch appliance that is designed to move the upper molars back and the lower teeth and jaw forward. Nothing covers the palate so they tend to be easier to adapt to than a Distal Jet or Pendulum appliance. They are often used instead of elastics, once all the adult teeth have erupt.

A headgear is a removable appliance used in adolescents to correct the type of malocclusion where the upper teeth and jaw are too protrusive. It works by placing pressure against the upper molars, preventing the upper jaw from growing forward or in some instances actually moving it back. In order for a headgear to be effective, it must be worn consistently a minimum of 14 hours per day. Anything less is non-productive. The length of time that the headgear needs to be worn is determined by the severity of the malocclusion. A headgear should never be worn while playing sports and should be removed while eating or brushing your teeth. 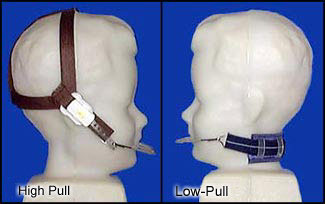 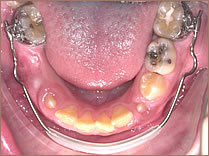 A lip bumper is a removable appliance used to create or hold space in the lower arch. It is often used during "early treatment" when mild-moderate crowding exists. It is worn 24 hours a day except while playing sports or brushing your teeth. The length of time that a lip bumper is worn is determined by the amount of crowding and the eruption of the premolars. Below is an example of a lip bumper. 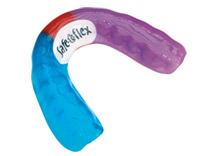 We are pleased to offer our patients custom-fabricated mouth guards for sports activities. Unlike stock mouth guards, which fit loosely because they are designed to accommodate many possible wearers, our sports mouth guards are tailored to fit your exact dental profile, providing the highest attainable level of comfort and security in a mouth guard.

The first step in fabricating these mouth guards is to take an impression of your teeth. We then use that impression and fabricate the mouth guard using special professional-grade materials. The perfect fit of these custom-fabricated mouth guards ensures that not only will your mouth guards fit comfortably, they will also offer the most protection and will interfere the least with speech or breathing.

A palatal expander is an appliance used to widen the upper jaw. There are many types of expanders; RPE, Haas, Quad-helix, TPA, to name a few. Some require manual turning on a daily basis while others do not. They are routinely used to correct a crossbite or broaden a person's smile. If an expander is needed, Dr. Ritucci will determine the appropriate one to use.

How to Turn a Palatal Expander

Find a place in the house that is comfortable and well lit, where your son/daughter can lay on their back with their head tilted backward. (Looking up toward the ceiling behind you).

HINT: Be sure to push the key all the way toward the back of the throat until it stops or clicks. That way, you will be able to properly fit the key in the next hole.

A "Pendulum" appliance is a fixed appliance, similar in design to a Distal Jet, which is also used to move the upper molars back when the bite is off. It, too, can be used instead of headgear if the patient is a candidate for it. Pendulum appliances work a little different than a Distal Jet and sometimes require an additional appliance called a TPA after they are removed.

Separators or spacers are elastomeric "o-rings" specifically designed to create a space between two teeth. They are used prior to placement of a band (silver ring) around a tooth and are usually worn for 2-7 days. When separators are in place, you should not chew gum or sticky foods or play with them with your tongue or finger. Also, you should not use dental floss in these areas. If a separator does fall out on its own, it means that sufficient space has been created. If one is accidentally dislodged, it may need to be replaced so call the office during normal business hours. The photos below show what separators looks like when inserted between teeth.

A primary (baby) tooth is sometimes lost due to decay or injury. If this happens before the permanent (adult) tooth is fully developed and ready to emerge, the nearby teeth can "tip" or shift into the space formerly occupied by the baby tooth. A space maintainer holds open the spot left by the lost tooth until the adult tooth is ready to emerge. (Photo 1)

A space maintainer can also be used as an "anchor" during active treatment to prevent teeth from drifting forward. (Photo 2)

Space maintainers are generally "fixed" appliances, which can only be removed by Dr. Ritucci.